With the days getting longer and slight improvement in the weather the fish are slowly getting into gear!! It won’t be long until everyone will be feeding loads and putting plenty of fish onto the scales.

With everything that is going on at the minute we are still remaining open and no better way than to self isolate than by the lake.

Both lakes fished better than recent weeks with fish showing in all areas of both lakes.

Match winner from fancied peg 36 Magpie was Mark cross the Ely based rod fished soft pellet and hard pellets over micros for a superb 105.12lb bag which included some beautiful carp.
Runner up in the continental payout and Jay lake winner was Tony Mcgregor from peg 01 he started on bread before switching to maggots for 81.08lb
Third spot was David Adams from peg 26 he caught on corn skins towards the Lilly bed for 69.05lb
The final frame place was The ever consistent Jack Gill from Jay 33 he caught on maggots and pellet for 64.02lb 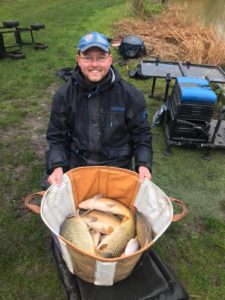